After serving a second nine-year term as a Senator, she has emerged the first female Vice President to Senator-Ambassador George Manneh Weah, under the Coalition for Democratic Change (CDC) Party, an assignment she believes has broken another glass ceiling in political history.

Senator Jewel Taylor grew up with her loving parents who died in service to the people of the Bong County, and their visible influence can be seen in Taylor’s dedication to serving her people. Becoming the First Lady of Liberia when her husband Charles Ghankay Taylor became president was a chance to become involved in the leadership of Liberia.

“During the time, I succeeded in the creation and successful implementation of the National Emergency Task Force which provided medical and humanitarian support to displaced citizens across the Country, especially women and girls; and also organized a Foundation for Girls education which catered to under privileged destitute girls. I was also involved in many other educational and health care projects across the Nation.”

After Contesting in the post conflict elections and was overwhelmingly elected as Senior Senator of Bong County, Liberia’s second most populated county, she began pushing for women empowerment. “I have served as Chairperson of the Women Legislative Caucus of Liberia. In this capacity, I have been a staunch advocate of women’s empowerment and have proffered for passage into Law several pieces of Legislation in support of women empowerment including an Affirmative Action Act for fair participation in politics and National Governance and the Domestic Violence Act.”

As a Senator, Jewel Taylor has continued to distinguish herself in leadership, and the people of Liberia have believed in her to give her A chance for the umpteenth time to serve them. “I feel blessed that I have distinguished myself in my service to community, church and country… I’m a vessel for positive change in my society.”

She shared about her compelling leadership attributes. “Charisma; that compelling charm which inspires devotion in others – that force of personality and strength of character which is an undying source of inspiration to many others, as well as the gift of perseverance, that endurance to carry on in the midst of life’s vicissitudes and challenges; that indefatigable spirit, diligence and commitment.”

She is a visible believer in women’s equity. This is her message to women “We must continue the struggle for women’s political and economic empowerment, until no one is left behind. And until women’s participation becomes common place in the governance structure of all Nations. This is still our task. Let us continue the forward march, for we still have many more miles to cover before we can rest.”

Senator Jewel Taylor’s commitment to Women development is being recognized by International Communities such as ECOWAS. She also currently sits on the board of African Women in Leadership Organisation (AWLO).

She has been conferred on Liberia’s highest honor as Knight Great Dame, Order of the Most Venerable Order of the Pioneers in 2005; granted to her by Former President Charles G. Taylor for her service to the Nation as the 21st First Lady of Liberia. Dr. Violet Arene is a bundle of Leadership Experience. Having successfully pioneered the Total Quality Management unit for Managers at NNPC, Arene now runs her personal consultancy, and has gone on to replicate such quality management trainings in other organizations such as Industrial and General Insurance (IGI), RCCG, and others. At this Leaders hangout, in (events of ) AWLO Induction 2017, Dr. Violet Arene shares on the Power of Purpose Driven Leadership. These are some of the Takeaways from her session:

[Tweet “A woman in Leadership is still a woman. Retain your elegance and feminine charm.”]

[Tweet “My value as a woman is not measured by the size of my waist, nor the number of men who like me.”]

My value as a woman is not measured by the size of my waist, nor the number of men who like me. It is measured by a Higher Purpose… it is something more sublime than just looking good for men.

[Tweet “A good heart and a good head are a perfect combination for leadership, and women have both.”]

Greatness is when you are about the greatness of other people. You do not become great by taking but by giving.

Character is the perfect criteria for Leadership. Africa is noted for irrelevant criteria such as Quota.

But if you say politics is dirty, it is dirty Politics that produce the leaders that lead you. We cannot term Leadership as dirty. Sometime last year, our office got a message from a woman who said, “Dear AWLO, please my daughter has been out of school. She is one of the beneficiaries of the #1Mother1Child Program, but has not received the regular school fees from your organization yet. Please send my daughter’s school fees so she can go back to school.” Then it dawned on us that we are running out of Mothers.

Hitherto, 1Mother1Child encouraged women leaders/members of AWLO – mothers, to support at least one child whether girl or boy. To sponsor, and mentor this child to attain any level of education.

[Tweet “Motherhood is a concept not just for mothers. We collectively are mothers of the future; charged to preserve the future generation”]

Now we realize that Motherhood is a concept not just for mothers. We collectively are mothers of the future; charged to preserve the future generation. To provide them with the necessary opportunities, infrastructure, legacy, and tangible support to leverage, to attain their full potential and become better leaders.

#1Mother1Child is an initiative of African Women in Leadership Organisation (AWLO), spearheaded by 1Mother1Child Project Director; H.E. Alanyingi Sylva. AWLO envisions that children from poor background can have a fair chance at education.

We are inspired by stories like, the Transformational Leader; Goodluck Jonathan, who says he grew up with no shoes, Oprah Winfrey’s rise irrespective of an abusive childhood, Albert Einstein who was termed dyslexic, and how Ben Carson rose from a poor background to becoming a world sought-after Neurosurgeon. These are signs that every child truly has a shot at attaining their full potential.

[Tweet “So far, the #1Mother1Child program has 100 plus children trained to various levels of education”]

So far, the #1Mother1Child program has 100 plus children trained to various levels of education; with some introduced to vocational trainings, and international scholarships.

It is our dream that #1Mother1Child grows bigger with everyone delivering their part as mothers of the future. It is bigger than just mothers, we are all custodians of the future. It behooves us all to play our part in the making of future leaders. 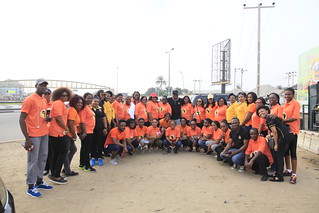